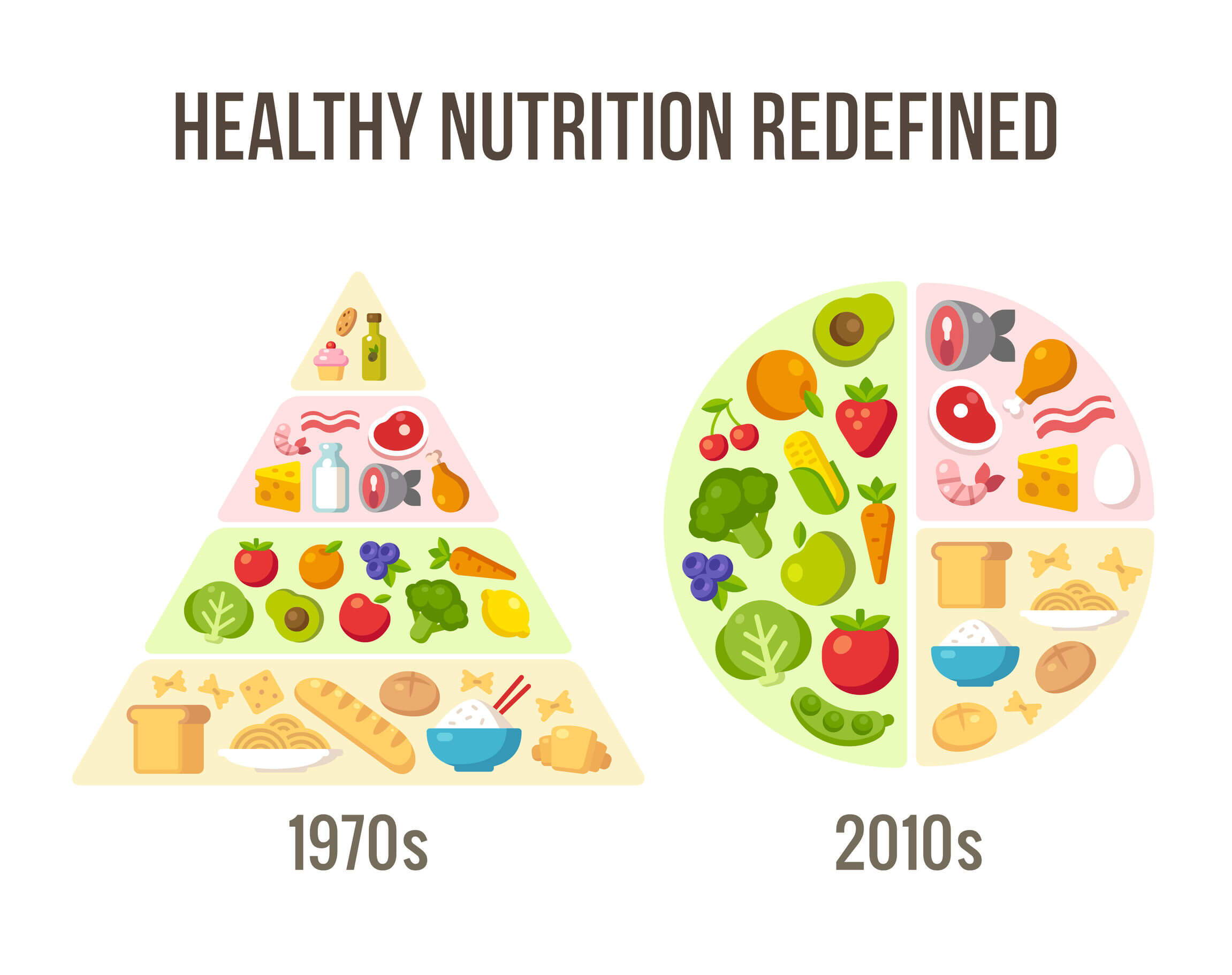 Probably you’re picturing a triangle consisting of several levels. Each level containing different groups depending on how much we should consume them on a daily basis.

I’m not sure how old you are. But when I was in primary school. We had much less knowledge on a healthy way of eating than we have now. This also means that the things we learnt earlier do not necessarily hold water nowadays.

Moreover, I can go as far as saying that. Based on the research done in the past decades. It’s high time that the so-called food pyramid needs a serious makeover. Just think about the buzz around dairy products and gluten or the various diets that focus on fat input. Something that I had discussed in an earlier piece.

Also, even though I firmly believe that. Instead of relying on rules set in stone and applied to everyone. You should have a customised diet! It’s important to familiarise yourself with the basics of the redefined pyramid. Some of the insight it provides can come handy.

The current food pyramid built on exercising and vegetables

The new model’s main difference is that it highlights the importance of exercising and how much of your life quality depends on it. Consuming vegetables (root veggies like carrot or celery), squashes (eggplant and zucchini), leaf vegetables, paprika and tomato only comes in second.

The best thing you can do is consuming these in their most natural – preferably raw – state. Surely, many of you have some apprehensions with this. Yet it’s not that hard to make a quick green smoothie, bake a cake with zucchini, cauliflower or oatmeal. These all sneak a tiny portion of vegetables into your diet without even noticing it.

This statement holds water in virtually any given diet. It’s beyond doubt that the micro-nutrients and fibres in vegetables are needed for a properly functioning body. From the digestive system, through the skin, all the way to your liver.

Dietitians list cold press oils and oily seeds (almond, walnut, cashew) amongst primary food. But you might want to be a little careful with these as they have high energy rations.

Moving forward. We have proteins, the most advised food. Because of their high omega 3 fatty acid – are fish. And apart from that, you can eat lean meat and eggs. Or if you’re vegan – legumes, tofu and seitan.

Fruits recommended in smaller portions! Because of their fructose contents, but it’s worth knowing that wild fruit usually contains less sugar. Moreover, berries and citrus also have much less fructose than lychee or grapes. 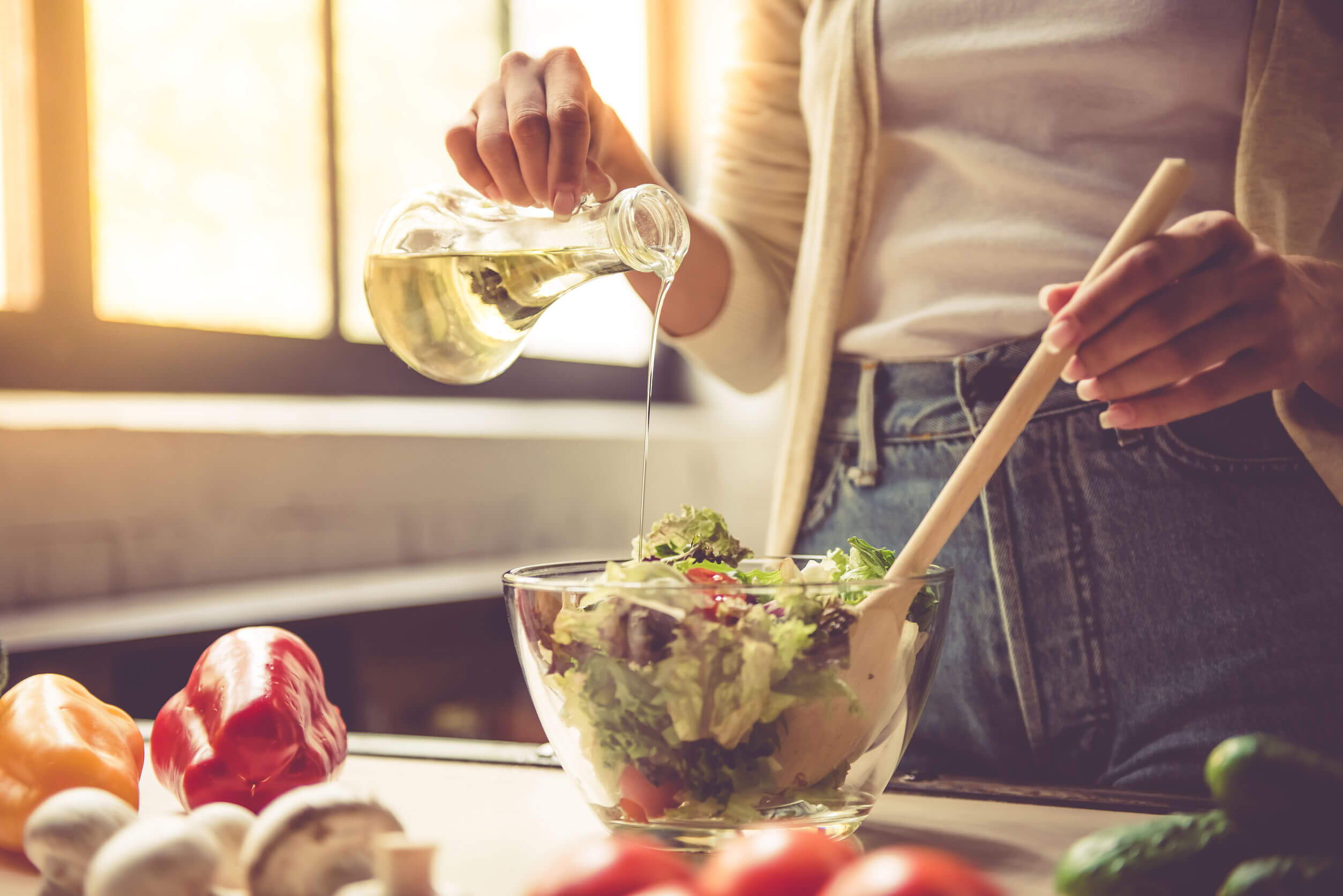 Milk being at the top might be surprising because most of us were raised knowing that needed for healthy growth. However, several studies have shown that this does not always hold water. Moreover, most adults cannot break down lactose contained in dairy products. (this is because our body does not produce the necessary amount of enzymes)

It’s interesting to think that while many of us are susceptible to this ingredient. Actual symptoms only appear upon excess consumption.

Another urban legend regarding dairy products is that. They contain essential nutrients (calcium, magnesium, vitamin D), which is needed by our body. This might be true, but many other foods contain a higher amount of these nutrients (e.g. in vegetables like broccoli).

Wheat products are also pretty divisive. This is due to the fact that they’ve been highlighted in several recent studies. As it turned out that most wheat types have a different structure than the ones our grandparents consumed. This is why it’s advised that we do not only minimise the consumption of bakery products made from plain flour. But also the ones made of whole grain wheat.

To sum up, I do not wish to push the tenets of the diet pyramid on anyone. I’d much rather say that while there are elements that are pretty useful to include in your diet when it comes to the details. It’s much better to customise how you eat according to your own lifestyle and body.

The 5 things the food pyramid teaches you

I know it’s hard, but try not to stress out – especially because the whole point of yoga is to relax. Don’t be ashamed if you don’t know every pose, because even a few sessions can improve you greatly, plus there is no one in the class who would frown upon your mistakes. Yoga is good because it teaches you patience and to treasure small victories as well.

Once the basics set, it’s up to you how you do the fine-tuning. You’ll know how much vegetable protein you have to consume to feel energetic. Also, which types of veggies are the most useful for you.

I’ve actually been talking to some friends of mine, who are either vegetarian or vegan. They feel like their energy levels have increased, their skin got smoother, and they sleep much better. If you decide to adopt their way of living. I recommend that you go step by step without trying to revolutionise every aspect of your diet.

Don’t get the wrong message!

I don’t want to discourage you from making drastic changes. Perhaps you’re the type who can only make considerable changes by implementing them from one day to another. It’s just that you should try to avoid failure due to a sudden change in your way of living.

This is the place where you can truly be yourself – by discovering your unique style.

We will treat your personal details with care and never give them to third parties. Our data management system is up to date with European General Data Protection Regulation (GDPR 2018). We promise that we’ll send you emails that you will read, but if you change your mind, you can unsubscribe any time.

Added to your cart: